“The happiest capital in the world”

Bangkok or Krungthep (as known to locals) is the capital and most populous city of Thailand. It holds around 8 million inhabitants which is about 10% of the country’s total population. Although it is the government, financial and investment centre of the country  there are calls to move its title as the capital elsewhere due to various problems such as its congestion and floods.

The capital is one of the most famed in South East Asia, a hotspot for tourists which featured in movies such as The Beach, Hangover Part 2, Street Fighter and many more. According to MasterCard the city ranked top destination by foreign visitors in its global destination cities index in 2018.

I visited Bangkok on a short 3 day period heading home from Myanmar back to London. Due to my short stay, I didn’t get to visit everything the city had to offer, however the places I did see were remarkable.

Firstly I stayed in a place called Ratchaprarop Rd which is unofficially known as the little India of the city. This area had various different night markets and small malls. It was a little noisy at night and there were a lot of people, however I didn’t experience a great deal of discomfort from my hotel room at Indra Regent Hotel.

Khao San road is one of the most popular place to go and stay for travellers and backpackers in Asia. A haven for hostels, bars and night markets, this road is central for affordable leisure and entertainment. 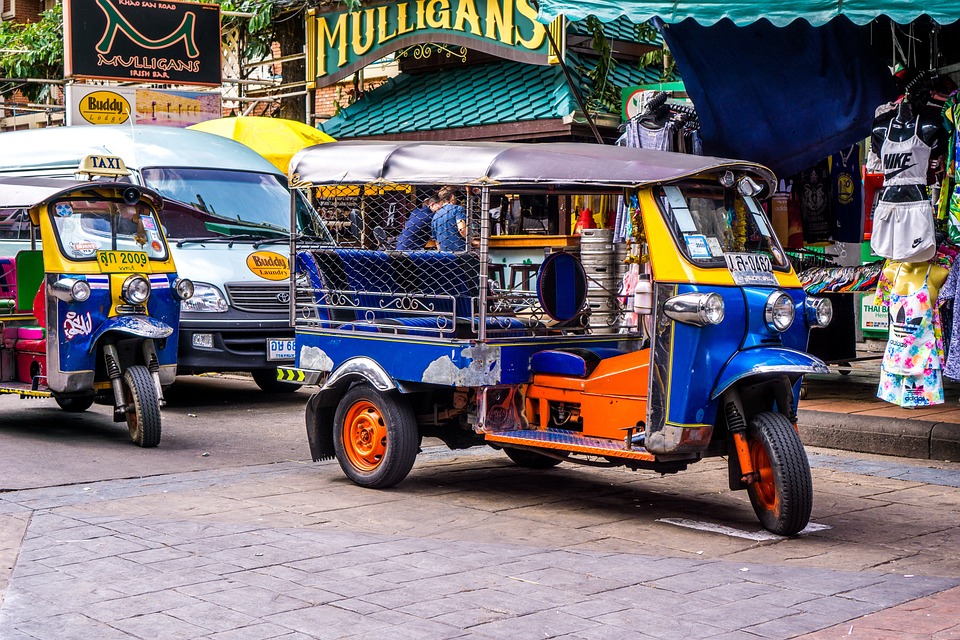 The Grand Palace is the official residence of the Kings. Tourists are allowed to visit the complex with a ticket which is bought online and collected 24 hours before the visit.  The complex is one of the main places to visit as a lot of the significant things to see such as the Emerald Buddhas, The Demon Guardians, The Statue of Cheewok Khomaraphat, Phra Mondop and many more are situated here. 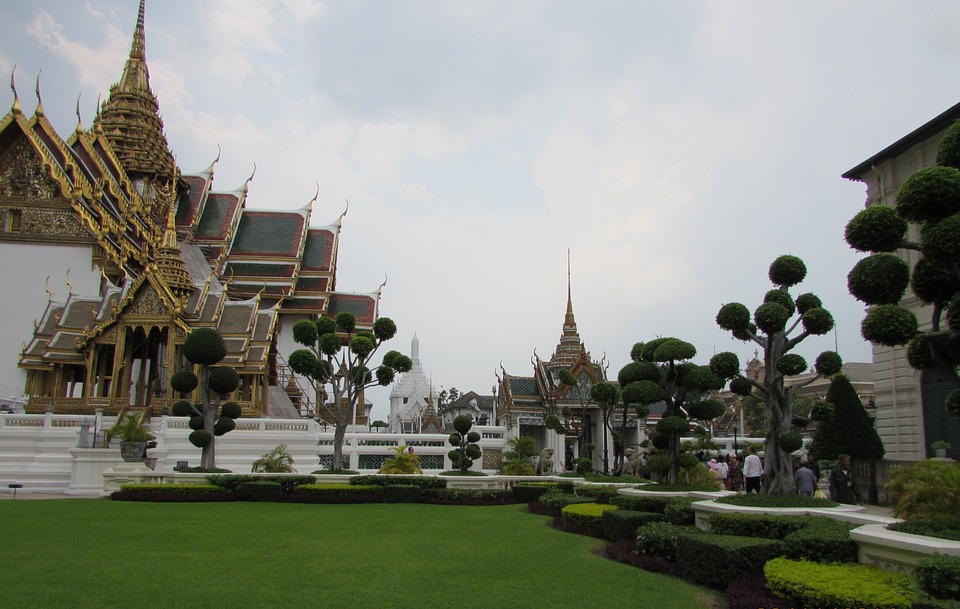 The Temple of the Emerald Buddha or Wat Phra Kaew (in thai) is in another complex right beside the Grand Palace and depending on what ticket you purchase, you may only need one to enter both. As the name states the temple is where the Emerald Buddha Statues are situated and these are one of the main attraction to see in Bangkok. Along with the Grand Palace this complex will be a very enjoyable for a full day visit. There is just plenty to see and all the details of artwork and architecture are fascinating.

Another complex to visit is the Wat Pho or Wat Po which is situated south of the Grand Palace. This complex is most notable for the Giant Reclining Buddha however like the Grand Palace there are loads of other attractions to see within its vicinity. I bought my ticket on the day of entry so I do not believe entry is as strict as that of the Grand Palace.

Malls are very popular in Bangkok and the city is full of them. These places are popular for tourists who want to relax, shop, dine and getaway from the heat of the outdoors. Just some of the malls are Terminal 21 which has an airport interior feel, centralworld probably the most popular for all, the luxury Siam Paragon which has one of the largest aquariums in South East Asia and so much more.

I also visited the arts and culture centre which is a free gallery showcasing Thailand’s modern arts. The exhibits change frequently and is popular for the more artistic personalities.

I went to the Damnoen Samnuak Floating Market and the Maeklong Rail Market which are very popular day excursions. I enjoyed and fully recommend the Maeklong Rail Market an active market on top of train tracks which is especially exciting when a train actually passes (I believe only twice a day). The market sells actual food products which cater to locals and not just tourists so you can feel the culture and normality of life. However I was disappointed with the Damnoen Samnuak Floating Market as this was made especially for tourism, everything sold were souvenirs and not actual products catering to locals, furthermore I may be wrong but I believe 100% of people there were tourists. So I did not feel true culture there. But nonetheless altogether it was a good day out especially the active rail market.

In conclusion Bangkok is a tourist haven, from its markets to its temples, its malls, nightlife, shrines and many other places in the capital.  Although the city alone has plenty to offer, there are  many very popular day excursions just outside its perimiter. I didn’t get to see all the city has to offer due to my short stay but even though, I have to say my visit was successful and enjoyable.

I believe 5 days to a week is a good duration to stay in the city, there is plenty to see and do. It is cheap so an even longer stay wouldn’t hurt your budget. The only negative aspect of the city I experience were locals trying to trick tourists into extorting more money, expensive tuk-tuk rides are a thing to lookout for, I advise to use the Grab taxi a set price booked with your phone. Nonetheless altogether Bangkok is a beautiful place with some of the most friendliest people in the world.

2019 has been a huge year for me travelling. I didn’t go to many places but I did tick off some of my targets on my bucket list. 2019 is the year I finally saw the Northern lights which is a huge tick on my list. It is also a year I have visited 7 new countries and a handful of their regions. I also scuba dived again after a few year absent from the activity. However most importantly 2019 will always be remembered as the year I met many travellers which I could say are friends and travel partners for many years to come.

Kuala Lumpur, Apr 19 – First trip of the year and it was a late one. I went for a mini Asian circuit trip and Malaysia was our first stop. To start things off we got straight to hostels, roamed the city on our own and also availed an elephant sanctuary tour.
Siem Reap, Apr 19 – This was probably the main focus of this trip, inspired by lonely planet I wanted to see the majestic ancient temples myself. Surprisingly and unplanned I somehow ended up getting to Siem Reap in the middle of a huge celebration(their new year) which we ended up joining in a huge water gun battle with local villagers.
Langkawi, Apr 19 – We then went to Langkawi a huge Malaysian island where we went jet skiing and visited a few of their attractions. This time round we were in a hotel to get a little bit of rest.
Koh Lipe, Apr 19 – We then excursed to a smaller Thai island to do some scuba diving. The best experience here was the more than unusual immigration system as you line up on the sand where you will see just a desk under a hut.
Kuala Lumpur, Apr 19 – Finally we end up in Kuala Lumpur again where we relax and do our final shopping.

Oslo, May 19 – A long weekend trip with friends which correct to reputation proved to be expensive. It was a lovely city with plenty of attractions.

Amsterdam, Sep 19 – Its unusual to travel to Amsterdam with your family with its reputation of being a place for adults. However the city wasn’t only for adults and there was plenty to do as a family.
Rotterdam, Sep 19 – After the Amsterdam trip I excursed to Rotterdam by myself which was my first and only solo trip of the year. Rotterdam was small but is proving to be progressing to be a hit for tourism in the future.

Bagan, Oct 19 – One of the best places ive been due to its openness and freedom this is also the place I met some of the greatest travellers there is.
Yangon, Nov 19 – Just like Bagan Yangon was a beautiful place I have met some great people. The city sprung a few surprises. It was more modern than I thought it would be and it also had some of the friendliest people in any place I have travelled.
Bangkok, Nov 19 – Long overdue visit to the Thai capital. It was meant to be a restful end to my holiday but it proved to be the opposite. The adventures were too great and I ended up visiting many attractions.

Reykjavik and southern coast, Dec 19 – A 5 day trip to one of the most exciting place I have visited. I finally got tosee the northern lights which is a big tick on my bucket list. Furthermore the country’s mountains, waterfalls and other natural landscapes were just out of this world.

It is my first trip to Myanmar and because of my shorter holiday leave from work I have opted to base this trip on two of the three main regions in Myanmar and a quick stopover in Bangkok before I go back home.

First stop Bagan and I have come here to see if my perceptions that this region’s archaeological zone would mimic or rival that of Cambodia’s Siem Reap. See how my visit turned out and what I thought of this province.

Formerly Myanmar’s capital but still a heavy populated bustling city. See what I got up to exploring this city

One of the most questionable excursion. A beautiful simple place but with its problems.

I planned to go Bangkok as a little rest break from my Myanmar experience. However my plans to rest didn’t go as planned and I started exploring.